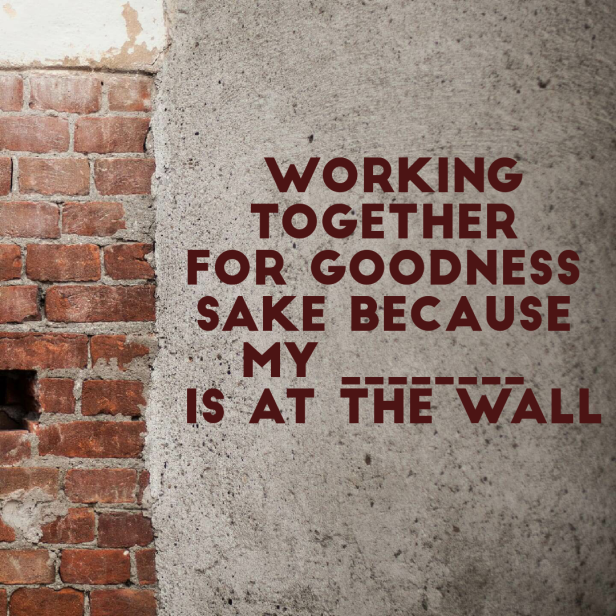 United We Stand. Divided We Fall.

Then said I unto them, Ye see the distress that we are in, how Jerusalem lieth waste, and the gates thereof are burned with fire: come, and let us build up the wall of Jerusalem, that we be no more a reproach.

(Neh 2:18)  Then I told them of the hand of my God which was upon me for good, and also the words that the king had spoken to me. And they said, Let us rise up and build! So they strengthened their hands for the good work.

(Neh 2:19)  But when Sanballat the Horonite and Tobiah the servant, the Ammonite, and Geshem the Arab heard of it, they laughed us to scorn and despised us and said, What is this thing you are doing? Will you rebel against the king?

(Neh 2:20)  I answered them, The God of heaven will prosper us; therefore we His servants will arise and build, but you have no portion or right or memorial in Jerusalem.
1970s Good Times sitcom:

“United we stand, Divided we fall

We’re the Awesome Foursome, until we are dead.”
James Evans Jr. was not in Biblical times. His unity among his brethren is what we need in the Church, that is, the Body of Christ, today. There comes a time, and the time is now, where we, as a body of believers, should take a stand for what is right for us, other people, and God Himself. By taking a stand in the name of Yahweh, our Heavenly Father shall heal the land.
Nehemiah took a stand. He heard about Jerusalem in ruins with burnt gates, fallen homes, a destroyed temple, and overtaken wall. Nehemiah prayed. A few months later, his prayer was answered with an inquiry and full approval of the king to set a time to go and build the city. The king also gave him military captains, workers and resources to move the capital project forward until completion.
Onlookers, both good and a few bad ones, noticed Nehemiah’s arrival in the city. They didn’t know what his exact plan was, but the opposing faces of evil were convinced that he was to “seek the welfare of the children of Israel,” “inquire for and require the good and prosperity of the Israelites.” (Neh. 2:10}
After three days of inspection, meditation and preparation, Nehemiah spoke to the Jews, priests, nobles, officials and others who worked: “Then I said to them, You see the bad situation we are in–how Jerusalem lies in ruins, and its gates are burned with fire. Come, let us build up the wall of Jerusalem, that we may no longer be a disgrace. Then I told them of the hand of my God which was upon me for good, and also the words that the king had spoken to me. And they said, Let us rise up and build! So they strengthened their hands for the good work.” (Neh 2:17-18)
The people gathered in Jerusalem and built the city walls in 52 days. That is less than two months. How did they do it? The Israelites also built houses, land, temple and other resources to help make the City of Jerusalem thrive once again.

How should we transform our financially, physically, socially, and spiritually terrorized communities that lay in ruins? What is the best way to ride our society of aggressive homicide, violent and nonviolent crime rates? Who and why should we, as children of the Most-High God, relinquish our personal feelings of opinions and habitual actions so our families and homes flourish again?
Our ____________ is at the wall. Although Nehemiah came to build the city, his __________ began at the wall. God made sure that Nehemiah and every one of the Israelites’ ____________ was at the wall. Everything fails if God’s people, that you and I, don’t know how to move about God’s business with His vision, His power, and His way.
There is my:

1. SECURITY at the wall.

a. Keep opposition away. Let the Holy Spirit have His way.

b. There always are opposing people who:

i. get angry and greatly enraged at other people’s progress. Vs 1

ii. ridicule and belittle God’s people, Vs 2-3 and

iii. gather naysayers to try to make matters worse, coming against the very work of God. Vs 2-3, 7-8.

c. “So I set [armed men] behind the wall in places where it was least protected; I even thus used the people as families with their swords, spears, and bows. I looked [them over] and rose up and said to the nobles and officials and the other people, Do not be afraid of the enemy; [earnestly] remember the Lord and imprint Him [on your minds], great and terrible, and [take from Him courage to] fight for your brethren, your sons, your daughters, your wives, and your homes.” (Neh 4:13-14)

a. Without vision, people perish.

i. The thing about vision is that nobody has to create one. God already has a vision. All we must do is follow His plan

a. Fear is faith contaminated. Faith is fear eliminated. No Fear Here because I have “the substance of things hoped for and the evidence of things not seen.” (Heb. 11:1)

i. the assurance (the confirmation, the title deed) of the things [we] hope for, being the proof of things [we] do not see and the conviction of their reality [faith perceiving as real fact what is not revealed to the senses]. (Heb. 11:1 AMP)

b. “And they came to Jesus and looked intently and searchingly at the man who had been a demoniac, sitting there, clothed and in his right mind, [the same man] who had had the legion [of demons]; and they were seized with alarm and struck with fear.” (Mar 5:15)

a. Nehemiah was in constant prayer. God instructs us to do the same.

i. “Pray without ceasing. In every thing give thanks: for this is the will of God in Christ Jesus concerning you. Quench not the Spirit. Despise not prophesyings. Prove all things; hold fast that which is good. Abstain from all appearance of evil. And the very God of peace sanctify you wholly; and I pray God your whole spirit and soul and body be preserved blameless unto the coming of our Lord Jesus Christ.” (1Th 5:17-23)

a. There is not limit to the praise we present to God because He is God.

b. “And at that time were some appointed over the chambers for the treasures, for the offerings, for the firstfruits, and for the tithes, to gather into them out of the fields of the cities the portions of the law for the priests and Levites: for Judah rejoiced for the priests and for the Levites that waited. And both the singers and the porters kept the ward of their God, and the ward of the purification, according to the commandment of David, and of Solomon his son. For in the days of David and Asaph of old there were chief of the singers, and songs of praise and thanksgiving unto God. And all Israel in the days of Zerubbabel, and in the days of Nehemiah, gave the portions of the singers and the porters, every day his portion: and they sanctified holy things unto the Levites; and the Levites sanctified them unto the children of Aaron.” (Neh 12:44-47)

a. “In whatever place you hear the sound of the trumpet, rally to us there. Our God will fight for us.” (Neh 4:20)

b. Jesus also said, “And I tell you, you are Pete…and on this rock…I will build My church, and the gates of Hades (the powers of the infernal region) shall not overpower it [or be strong to its detriment or hold out against it]. I will give you the keys of the kingdom of heaven; and whatever you bind (declare to be improper and unlawful) on earth must be what is already bound in heaven; and whatever you loose (declare lawful) on earth must be what is already loosed in heaven…Then Jesus said to His disciples, If anyone desires to be My disciple, let him deny himself [disregard, lose sight of, and forget himself and his own interests] and take up his cross and follow Me [cleave steadfastly to Me, conform wholly to My example in living and, if need be, in dying, also]. For whoever is bent on saving his [temporal] life [his comfort and security here] shall lose it [eternal life]; and whoever loses his life [his comfort and security here] for My sake shall find it [life everlasting]. For what will it profit a man if he gains the whole world and forfeits his life [his blessed life in the kingdom of God]? Or what would a man give as an exchange for his [blessed] life [in the kingdom of God]? For the Son of Man is going to come in the glory (majesty, splendor) of His Father with His angels, and then He will render account and reward every man in accordance with what he has done.” (Mat 16:18-27)